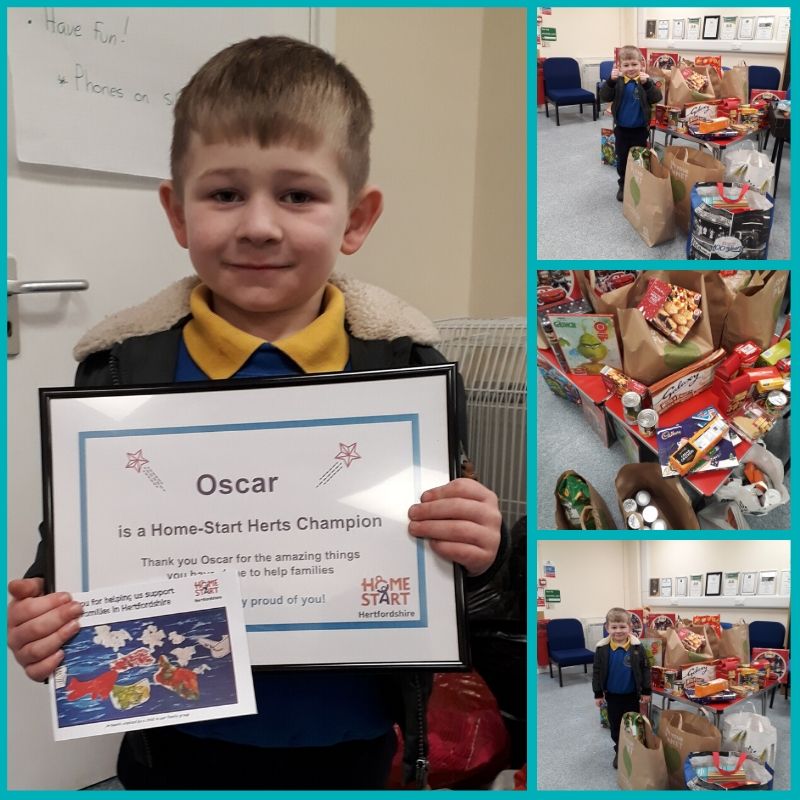 Last year when he was just 4 years old, he saw a homeless man sleeping on the street. Following a conversation with his mum, he was sad to find out that some adults and children didn’t have homes and happy families.

Oscar’s unexpected response was that he wanted to donate some of his toys. With his mums support, he set up ‘Oscars Christmas Appeal’. The appeal was hugely successful and he received many generous donations.  Oscar visited the Home-Start office and presented a huge collection of toys to go to the children that they support.

This year Oscar wanted to do something again and started up another appeal.  This time for Christmas food donations, so he could (with a bit of help from his mum) make up hampers as gifts for Home-Start families.

With the support of his school, Martins Wood, and the local community, he received a huge amount of donations and to make up lots of hampers!

Oscar visited Home-Start last week to deliver all the donations, ready for making up into hampers for the families.

When asked why he chose to do this, he simply said

“I am so proud of him he was so excited every time he received a donation he didn’t get bored or lose interest like I thought he might have done he was so dedicated to it right up until we dropped it all to Home-Start!

Definitely my little superstar Santa will be bringing him some special treats this year his earned his place on the nice list!”

“We were delighted to meet Oscar and his mum, again.  Oscar is just such an incredibly thoughtful and special boy who is really helping to make children’s and families lives happier. He is an absolute super Star!”